The Twin Towers were brought down by explosives, not plane crashes. 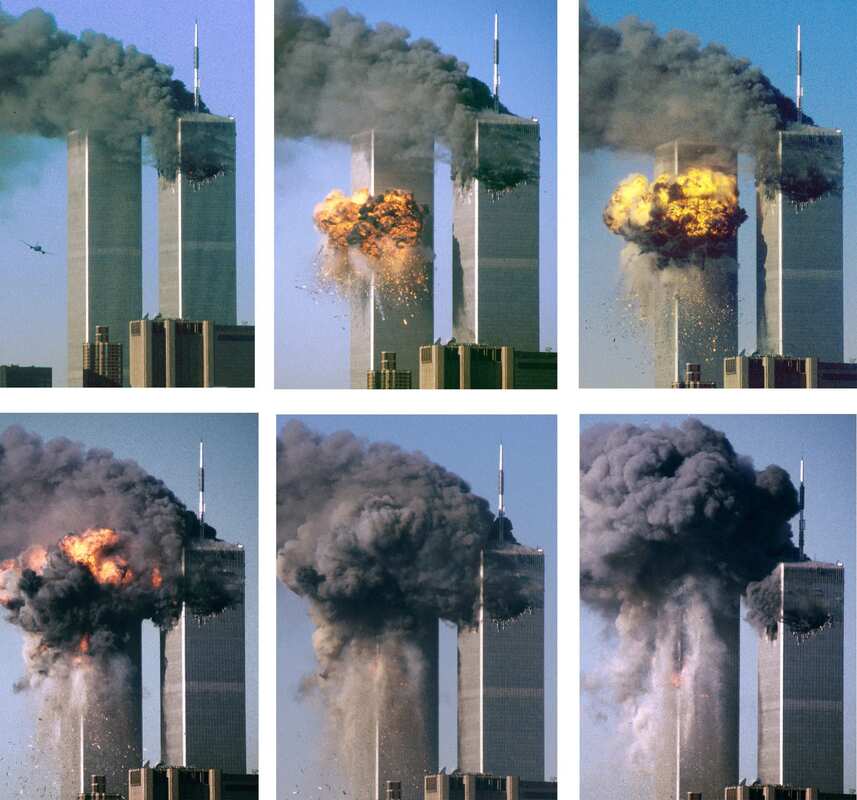 A series of images in chronological order of the planes hitting the twin towers on September 11th, 2001. These images are from a History.com article but taken by Sean Adair from CORBIS.
Generally Accepted Account:
American Airlines Flight 11 and Flight 175 crashed into the North and South towers of the World Trade Center. These crashes caused the towers to collapse within the next hour, killing thousands of people.

Alternate Claim/Theory:
The planes alone would not be strong enough to penetrate through the steel structure of the towers. Therefore, explosives were also used in the attacks in order to get the towers to collapse.

1. Flight 11 crashed into the north tower at 8:46 am and Flights 175 crashed into the south tower at 9:03 am.
2. The south tower collapses at 9:59 am, 56 minutes after being hit. The collapse itself lasted 10 seconds and killed more than 800 people, including first responders.
3. The north tower collapses at 10:28 am, 102 minutes after being hit. This collapse killed more than 1,600 people.
​4. The two towers collapsed nearly symmetrically while falling down into their footprints.
5. This pattern of collapses is only plausible through the use of controlled demolition.
6. With controlled demolition, explosives are used to destroy a structure internally. This is done by placing explosives on the building's lower floor levels to create a controlled collapse.
7. Before 9/11, no fires "caused the total collapse of a steel-framed high-rise" (Robert Korol).
8. Even with corrosion, steel is a stronger metal than aluminum. Meaning, it would be extremely difficult for an aluminum plane wing to pierce through steel support beams of a building.
Who are the largest supporters of this theory?
1. BYU physics professor, Steven E. Jones
Professor Jones studied the physics of 9/11 and published a 9,000 word article published in Elsevier's book "The Hidden History of 9/11".  Jones examined how the towers collapsed, how long it took for the towers to collapse, the smoke patterns, and the temperature required to evaporate steel supports.
​
Jones' biggest supporting arguments for this theory include:
A. "The three buildings collapsed nearly symmetrically, falling down into their footprints, a phenomenon associated with controlled demolition."
B. "No steel-frame building, before or after the WTC buildings, has ever collapsed due to fire. But explosives can effectively sever steel columns."
C. "WTC 7, which was not hit by hijacked planes, collapsed in 6.6 seconds, just .6 of a second longer than it would take an object dropped from the roof to his the ground. Where is the delay that must be expected due to conservation of momentum...? Upper-falling floors strike lower floors... the fall must significantly be impeded by the impacted mass... The paradox is easily resolved by the explosive demolition hypothesis... which allow near free-fall speed collapses."
D. "Horizontal puffs of smoke, known as squibs were observed proceeding up the side of a building, a phenomenon common with pre-positioned explosives."
E. "Steel supports were 'partly evaporated', but it would require temperatures near 5,000 degrees Fahrenheit to evaporate steel - and neither office materials nor diesel fuel can generate temperatures that hot."
2. Civil Engineering Professor & Fellow of Canadian Society of Civil Engineering, Robert Korol
Robert Korol authored a report with professor Jones. 15 years later, this report was titled "On the Physics of High-Rise Building Collapses" and published by the Europhysics New Journal. Korol also examined the collapsing pattern and possibility of the towers.
​
Korol's biggest supporting arguments for this theory include:
A. "The only phenomenon capable of collapsing such buildings completely has been by way of a procedure known as controlled demolition..."
B. "Neither before nor since 9/11 have fires caused the total collapse of a steel-framed high-rise..."
C. "The fires were on the upper floors, so there's little chance the heat would have spread down and caused the steel columns... to sufficiently weaken and collapse in the twin towers."
D. The columns, connectors, and floor beams "were treated with a fire retardant which would have insulated them."
E. "Sprinkler systems would have reduced heat factors, while the overall design of the steel structure would isolate any failure and prevent a domino-effect collapse."
How does psychology influences these conspiracy theories?
Many studies have been done in an attempt to see if there is a connection between personality traits and the likelihood of believing in conspiracy theories. According to M.D Joe Pierre, "people who believe in conspiracy theories tend to have a greater need for cognitive closure and to be unique" (psychologytoday.com).
​
Cognitive closure is the continuous desire to find explanations to something when previous explanations are lacking. People who believe in conspiracy theories are more likely to have cognitive biases such as hypersensitive agency detection or teleological thinking. These biases mean people typically think events are "overattributed to hidden forces, purposes, and motives".

Other research has shown that belief in conspiracy theories is also associated with analytical thinking skills and lower levels of education.
References
Asquith, C. (2006, September 5). Who really blew up the twin towers? Retrieved
from https://www.theguardian.com/education/2006/sep/05/internationaleducationnews.highereducation

Hughes & Salvidge Co. (2017, October 13). How Controlled Demolitions Work And When To Use Them. Retrieved from
https://www.hughesandsalvidge.co.uk/news/controlled-demolitions-work-use/